We Don’t Bid Low And Supplement!

From time to time we are asked to review competing bids for completeness and adherence to industry standards and are often surprised by the omissions. Unlike a shirt, for instance, where regardless of price, you’re at the very least still getting a shirt, many bids in our industry just are not the same. Many of these bids don’t include much of the necessary tasks to resolve the indoor environmental problem, with the intention of the unscrupulous vendor to later add additional tasks or services at an additional cost to the consumer, despite the fact that the vendor knew this work was necessary prior to work beginning. These types of tactics are commonly referred to as Bait & Switch. In cases of Mold Damage in particular, these supplements can result in considerable delays as well as a great deal of cost to the consumer. 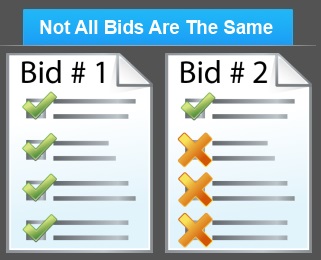 This makes it incredibly important to understand and compare what is being included in competing quotes before making a hiring decision. In the past, we have seen bids that did not include necessary Drying and Water Mitigation, remediation of known mold growth in wall cavities (though the quote was for mold remediation), and needed Final Repairs. Because this needed work was not included in the original bid, it leads the consumer to believe that this bid is the lowest and most competitive bid. Though this work was not included in the initial bid, this work is necessary to the successful completion of the job and the vendor later adds this work as a supplement to the original bid so that the unsuspecting consumer ends up paying much more than they expected.

It’s important to understand the impact supplements can have on a bid that previously seemed “low”. While Disaster Blaster does not do this, it is not uncommon for a company to bid low in order to secure the job, with the intention to supplement later. In the past, we have seen supplements that doubled or even tripled the initial bid.

Contact your local Disaster Blaster today for a quote for your project.